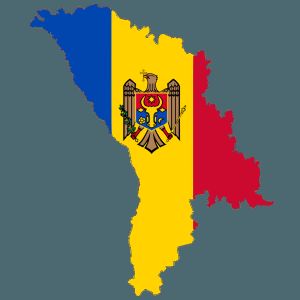 In the summer of 2017, a team from RYC took part in a mission trip to the Eastern European country of Moldova.  The entire trip lasted 17 days, including a 4-day training camp in Harpenden before flying out to Chisinau, and 2 days of de-briefing upon our return.  The RYC team consisted of 9 young people, 3 adults, and also a leadership team from Mission Adventures. 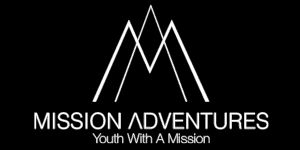 We partnered with Mission Adventures, a short-term missions agency that is a branch of Youth with a Mission (YWAM).  The MA team was really great about getting us prepared for cross-cultural work, and they were all very warm and welcoming. 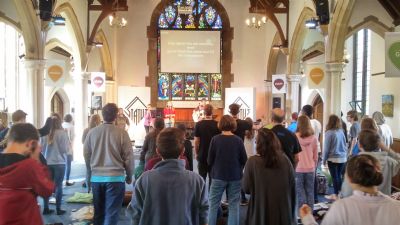 The RYC worship band led worship during one prayer meeting at the Harpenden training camp.  During this camp, we prayed together, did team-building exercises, cross-cultural immersion training, and getting to know our MA team leaders Jason and Amanda.  One of the most interesting, and also useful exercises, was a simulated cross-cultural interaction.  We visited a fictional family from the Middle East and tried some interesting foods--spiced tree bark, crickets, and meal worms. 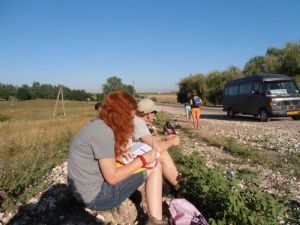 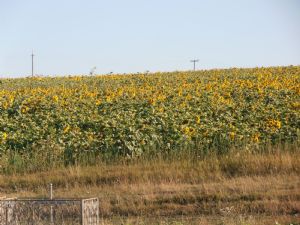 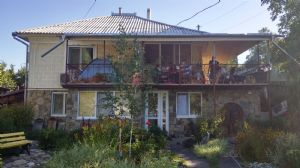 After our flight to the capital city, Chisinau, we had a long journey in a cramped van to Ocnita, our base for the week.  All 13 of the team plus all of our baggage.  We had a great time bonding, laughing, praying together, and singing worship songs.  We were all overwhelmed by the sunflowers everywhere!  Moldova has a largely agricultural economy and there were orchards everywhere, as well as watermelon patches, sunflower fields (like the one pictured above), and people herding sheep, goats, and cows on foot--even the children were involved.  The house pictured above is the pastor's house where we stayed.  If you look closely you can see a blue tent where two of our team members slept. 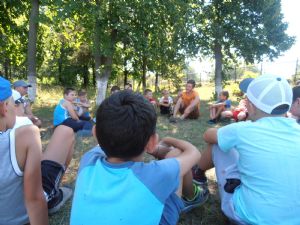 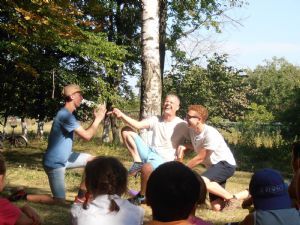 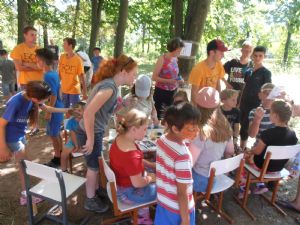 Our mission to Moldova was centred on working with children.  We helped a local pastor to run a day camp for children in the village of Birnova.  Each day began with games, relay races, music, dancing, and football, and we also had time for Bible studies, drama sketches and other activities.  In the middle picture, you can see Sam, Loyd, and Michael doing a silent skit (or mime) demonstrating the forgiveness of sin, without using any words.  The people of Moldova speak either Russian or Romanian or both, so the language barrier was a challenge.  We were amazed how far kindness and a warm smile went to breaking down those barriers.  A few of the children were learning English at school and they were keen to put their skills to use.  The picture on the right shows a queue of children eager to get their faces painted! 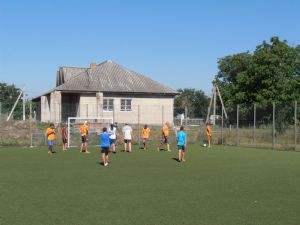 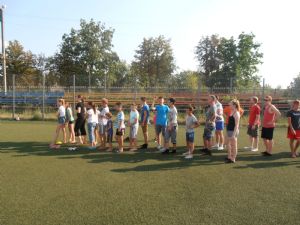 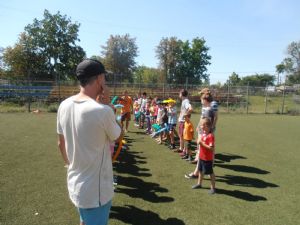 Another key tool in breaking down the language barrier was the international language of football!  We played nearly every day, with teams consisting of local youth, Moldovan leaders, and Rudgwickians.  The photos in the centre and on the right show our preparations for the massive relay race from the final day of the camp. 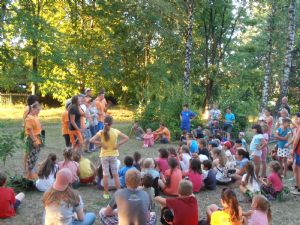 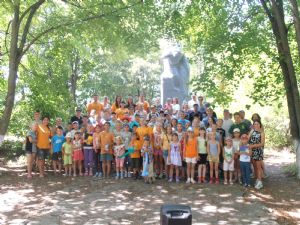 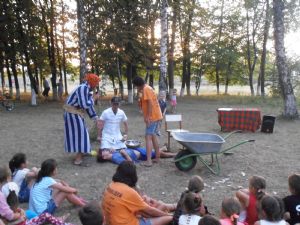 The whole point of the day camp, of course, was to share the love of Christ with the local children.  Following the lead of the local team, we assisted with loads of fun activities: trampolining, frisbee, capture the flag, making balloon animals, and much more.  Each day also saw biblical drama sketches, small group Bible stories, and a large group talk.  We also shared in the local Baptist church on Sunday morning, Samuel and a few others helped lead worship, and Sam and Chris did the main sermon with the help of a translator.  It was a wonderful experience to worship with our brothers and sisters in another country who speak a different language, but worship the same God. 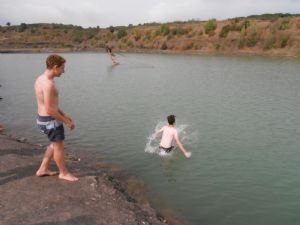 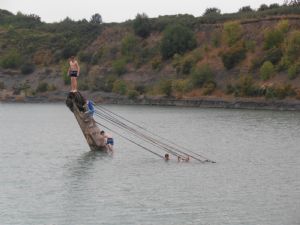 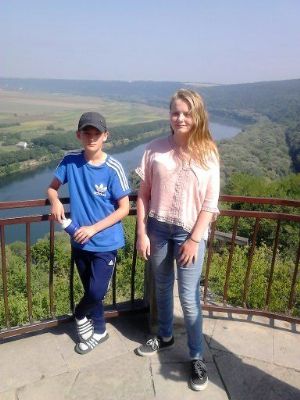 After the children's camp was over, it was time to celebrate.  We spent our final days relaxing and taking in some sightseeing.  Among the highlights were visiting a local lake.  This used to be a quarry mine, but when it was being dug, they hit an underground spring.  The quarry quickly filled with water and resulted in the large lake you see here.  The picture on the right shows a submerged crane that is still there to this day.  It was a great platform for diving!  We also visited the Soroca Fortress on the way back to Chisinau.  You can see the Dnister River in the background, which serves as the border with neighbouring Ukraine, which you can see across the river. 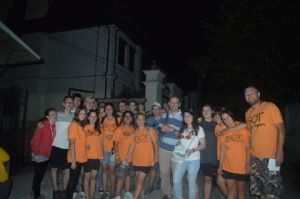 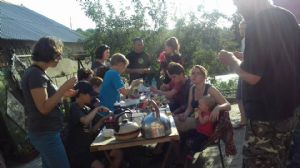 The photos above show our final night in Chisinau, and breakfast just before heading to the airport to get back to Harpenden for 2 days of de-briefing and processing.

The trip was an amazing experience for our group, and it was a pleasure to work with Pastor Andrei, his wife Larisa, and their amazing team of young adults.  The names and faces of the children and young people in Moldova will remain in our hearts always.